The Indian Express speaks to former head of Maharashtra’s medical education and research board Dr Pravin Shingare, currently a pro-chancellor of a deemed-to-be university, about the issues that private medical colleges have with the new NMC fee guidelines. 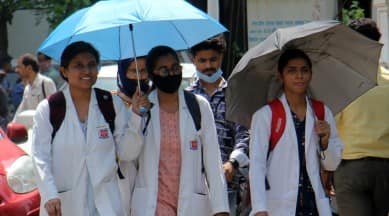 https://creatives.contextads.live/2022/India/September22/Joyalukkas+Navratri/IE/Wap/Joyalukkas_Wap_IE.html?impTrk=bm90QWxsb3dlZA%3D%3D&isTp=dHJ1ZQ%3D%3D&clkSt=aHR0cHM6Ly93d3cuam95YWx1a2thcy5pbi9wYWdlcy9uYXZhcmF0cmktY2VsZWJyYXRpb24vcGdpZC0xNDcyMjcxLmFzcHg%2FdXRtX3NvdXJjZT1Gb3JrbWVkaWFfV00mdXRtX21lZGl1bT1DUE0mdXRtX2NhbXBhaWduPUpveWFsdWtrYXNfTmF2cmF0cmlfQ2FtcGFpZ24mdXRtX2lkPVNlbGVjdGVkX01hcmtldHMmdXRtX3Rlcm09QmFubmVyJnV0bV9jb250ZW50PWVuZ2xpc2g%3D&clkEx=aHR0cHM6Ly93d3cuam95YWx1a2thcy5pbi9wYWdlcy9uYXZhcmF0cmktY2VsZWJyYXRpb24vcGdpZC0xNDcyMjcxLmFzcHg%2FdXRtX3NvdXJjZT1Gb3JrbWVkaWFfV00mdXRtX21lZGl1bT1DUE0mdXRtX2NhbXBhaWduPUpveWFsdWtrYXNfTmF2cmF0cmlfQ2FtcGFpZ24mdXRtX2lkPVNlbGVjdGVkX01hcmtldHMmdXRtX3Rlcm09QmFubmVyJnV0bV9jb250ZW50PWVuZ2xpc2g%3D&zoneid=920&bannerid=16955&type=NAE&CN=test&clickTrack=true&brandingFlag=true&closeButton=true&autoSettletime=10The Association of Health Sciences Institutes has moved the Supreme Court against the guidelines on Monday. (File image)

The National Medical Commission (NMC), the country’s apex medical education regulator, issued a memorandum in February to reduce the fees for 50% of the seats in private medical colleges to be at par with government medical colleges. The memorandum also had detailed guidelines on fixing fees in private medical colleges, including those under deemed universities, many of which did not have fee regulation mechanisms. The Association of Health Sciences Institutes has moved the Supreme Court against the guidelines on Monday.

The Indian Express talks to Dr Pravin Shingare, former head of Maharashtra’s department of medical education and research, about the issues private medical colleges have with the guidelines. At present, he is a pro-chancellor of a deemed-to-be university in the state. Excerpts:

*The NMC office memorandum has a set of “principles” that medical colleges have been asked to follow for determining their fee structure. What is the contention of private medical colleges?

The National Medical Commission has, in fact, issued two different types of guidelines in the memorandum. The first guideline says that the tuition fee (for 50% seats) should be at par with the government medical colleges. The second guideline states that the fee should be fixed as per the principles. They have given 25 principles.

Vijay Rupani interview: ‘The legislature party meeting is merely a …

What the Rajasthan political crisis highlights: Congress effectively has …

All state government medical colleges have a single fee figure that is decided by each state’s fee regulatory committee. If there is a central government college within the state, that fee is not applicable to it. If we look at the Maharashtra government, it has already finalised the fee for 2022 batch as Rs 1.1 lakh.

As per the first guideline, this 1.1 lakh fee will be applicable to 50% seats in all private and deemed universities in Maharashtra.https://results.indianexpress.com/widget/iframe?lang=1&year=2022&sourceDomain=1

This is the power given to the NMC by the Act. Once this is obeyed, then the NMC cannot issue guidelines for the remaining 50% of the seats. They do not have the legal power.

If the guidelines stopped here, then there would have been no problem.

*The second part of the memorandum, relating to the principles to be followed for fee determination, is actually applicable to all the 40,000+ private medical college seats?

Yes. The second guideline says that you have to calculate the unit cost of education in your college on the basis of audited accounts from the last three years.  They have given several directions on adding this, deleting that…to arrive at the total cost that the students will pay. That means they are trying to control 100% seats, which is illegal.

*The costs calculated on the basis of these principles would be divided among the rest of the 50% seats that aren’t controlled by the first guideline?

But, at the end of the day, they are controlling the fee for all the seats.

*With the order challenges in several courts, is the revised fee structure likely to be applicable from the current session for which admissions will start soon?

The exam results for this year’s NEET has already been announced and soon the counselling process will start. The Medical Counselling Committee will ask all the colleges to submit the figures of the fee probably in a week or ten days so that students are aware of the fee structure when they fill in their choices. The colleges and deemed universities are likely to submit whatever were the fees last year.

HNow that the association of private medical colleges based on the Kerala high court order (which says that the NMC order will not be applicable in the state) have petitioned in the Supreme Court, there has to be an interim order on whether the last year’s fee structure should be followed till there is a decision on this petition

← HOW TO SUCCEED IN THE PSYCHIATRY CLERKSHIP
Chikungunya →