Government Apathy towards Small Medical Centres in the Battle of Corona…A strategic Mistake.

“The war has begun, the bodybags have started pouring in but I see none of them wrapped in the tricolour, no one honouring them with 21 gun salute.”

A war is won not by the political and bureaucartic hail of befuddiment but by the corage and valour of the frontline soldiers.

The problem with the Indian healthcare system had been that its political masters have not only failed to recognise the valour of its outreach cadre but also have served them a recipe of confusion. In the absence of a clear and guiding strategy to motivate and recruit private healthcare professionals in the war against COVID 19, Indian healthcare is heading towards a catastrophe. Who are these private healthcare professionals and why blatant neglect of their issues will be blunder we ought not to indulge in?

We need to understand this very clearly, our healthcare situation, especially in the wake of this present-day pandemic crisis.

• The government-owned hospitals and dispensaries.

• The private corporate hospitals owned by the big business houses, and

Almost 70 percent of Indian healthcare need is being taken care of by these small hospitals, nursing homes and individual clinics.

Like it or not but the fact of the matter is that today a considerable burden of our nation’s healthcare need is being shouldered by the small set-ups, and they are doing a decent job considering the hostile environ created for them.

While the government hospitals are overcrowded and falter in the timely and effective deliverance of services. (the services are assured but their timely delivery is not guaranteed), the corporate hospitals are business house and are run on the principles of return on investment basis. The services provided by them are effective, no doubt, and their timely delivery guaranteed as well but if only you have way more then enough bucks in your pocket.

That leaves the majority of the Indian population to rely on these smaller centres where he can get effective, affordable, almost doorstep services and can establish a direct relationship with the treating doctor. (And that’s very important because this personalised faith and confidence can be used as a tool to spread awareness especially in any crisis situation like this pandemic.)

Despite their colossal contribution as the number one healthcare provider in the country, the government machinery has left no chances to disown them, disown their contribution and credentials at each and every step. In fact, I would go as far as saying that they have done everything to make life hell for them.

Right from the district development authorities (since most of them are being run from the residential premises) to the municipal corporations, to minuscule politician to media hooligans, every tom dick and harry feels it their birthright to harass them and to blackmail them. They find no one to turn to.

Let us understand very pragmatically and clearly that corona is here to stay for some months or maybe years to come and the sooner we equip our armamentarium to deal with it the better it is going to be otherwise all, we can expect is a flood of bodybags.

Since seventy per cent of our healthcare army comprises of these individually owned private setups we must make an effective strategy to equip them as well. Scaring them away or glowering at them with step brotherly attitude will do no good.

What needs to be done

Bringing them (individually owned private setups) on board with sensibility and sensitivity by giving due considerations to their problems and shortcomings will reflect sincerity of effort on the part of government not only to fight this pandemic but also to better our healthcare scenario in general.

• Do Not scare them away, the private practitioners: As it is there is utter confusion in the minds of these practitioners due to lack of a clearcut directive regarding their role in today’s scenario, threatening them with dire consequences should something go wrong will serve no purpose but cocoon them in their houses. Some advisories (mostly by way of reckless media reporting to sensationalize the issue) force them to open their OPD despite the fact that OPD is shut nationwide even in big hospitals Government and otherwise, while the other notices issued are forbidding them to do so.

• Do not threaten them with sealing and other penal actions: After all, you need their cooperation and not their hostility. Anyways, sealing is rather a very derogatory term and should not be used, it sends a very wrong message among the public as if the doctors themselves, by a malign intent are the culprits and are corona spreaders, as claimed by few Media reporting while the fact of the matter is that they were only honouring their social obligation. 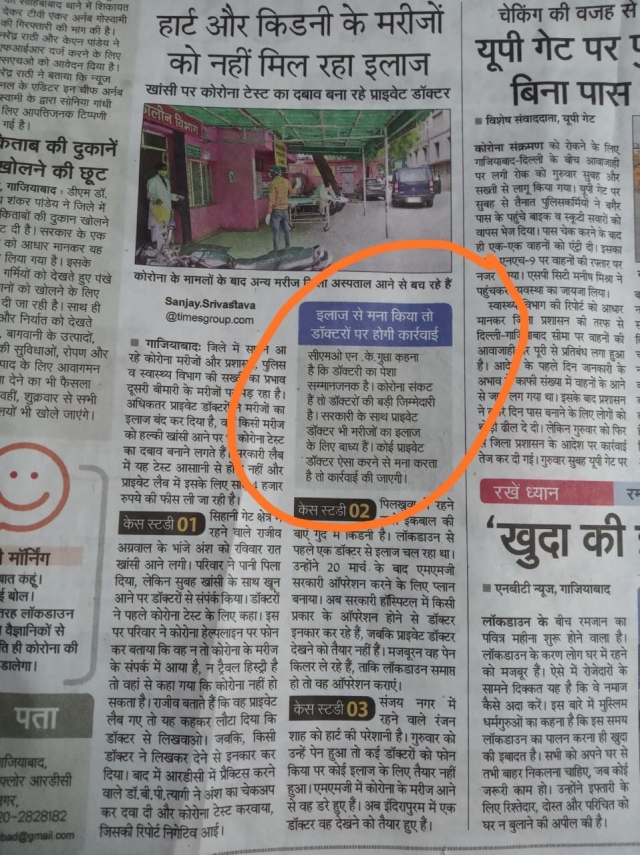 There was a debate on one of the news channel the other day proclaiming that private nursing homes have shut down their operations beacause they are greedy, work when the situation was favourable and close when there is even a small challenge. I don’t know from where they came to this conclusion, this very offending conclusion. To shut down an organisation, even the samallest ones, with surmounting liabilities of salaries, bills and bank EMI can never be considered a greed. In fact, opening full flegedly will be economically lucrative in the present situation. So, please be careful before you inject such poisionous sting into the public mind.

• Understand their problems and logistics: Unlike the government hospitals which are centrally or state-funded and unlike the corporate hospitals where the profit margins are huge, these small setups are working on very thin profit margins and in this day of crisis the hospital footfalls have significantly reduced to almost ten to fifteen per cent of the original therefore expecting them to burden themselves with additionally with the incurring costs of PPEs and other norms and continue to function in the same nominal costings of theirs without billing for these PPEs from the patients will be unreasonable.

• Bring them on board in decision making and be reasonable: I see hardly any representation of the Nursing-home owners in the decision makings. Most of these policies are executed by involving the topnotch private and government representations, the reason they fall flat at the ground level. Just to give you an example there was a notification two or three days back that all admissions into a healthcare facility for whatever indication they are admitted will compulsorily have to undergo COVID testing.

Frankly speaking, this is not only an unreasonable waste of resources but also very difficult and poses a very difficult practical problem. The test costs about 4500 rupees who is going to bear that expense.

Let’s say a man gets his expectant wife to a nursing home for her delivery and the doctor advises him regarding the need of corona testing as per the guidelines and he refuses to spend that much money (and I don’t blame him either the poor guy has somehow managed to save a meagre amount for his wife delivery and considering the economic crisis, his job is not secured, cash flow is hardly good enough to sustain his modest living and there are not good enough to suspect COVID either). Who is going to be liable, doctor or the patient? Who is going to bear the brunt of administrative fire?

Of course, the COVID testing should be done but only if the government can make it free of cost.

• Assure them that they will be well taken care of: What the doctors are afraid of is not the Corona per see (barring a few with comorbidities and immunosuppressive dependants). They understand well that they will have to learn to deal with them. What really scares them is the rude victimisation should a case is anyway linked to them or their centres. Most of them don’t need a fifty lakh indemnity, all they need is an assurance from the authorities that they will be dealt with the respect they deserve, they will be housed comfortably should a need for quarantine arises. Afterall why these star hotels were acquired, for political VIP’s?

• Do not create a rift between private and government doctors both are an essential part of our system and are not mutually exclusive. Just a few days back I was watching a news programme the DNA where an otherwise very sensible anchor was trying to influence a very reckless view upon his audience, a very irresponsible attitude indeed, saying ” look you all have always been inclined towards the private doctors and in this time of need only the government doctors are helping you…and bla bla.” This definitely is not the time to create a divide between the private and the government sectors and there could be, should be, no reason to poison the supple minds of the general public against one or the other.

By threatening with court marshall you can force a soldier to go out in a battle field and die but surely winning the war requires a different mindset, a mindset motivated by the backing of love and assurance.

The purpose of this writing is not to offend anyone but only to bring into light the grassroots realities. My humble apologies if my intentions are misread.